Story and World each with a unique personality, designed to offer contemporary and stylish settings for an amazing Vegas getaway! Book now and save with Sahara Hotel Deals.

A sleek, seductive retreat awaits at Sahara Las Vegas is an all-encompassing, mixed-use resort and casino. With more than 1,300 guest rooms and suites, 30,000 square feet of meeting space, and a collection of sbe’s acclaimed restaurant and nightlife brands. This Las Vegas hotel indulges and tempts the senses with Bazaar Meat by José Andrés, Katsuya, multiple nightlife offerings, and Sahara retail.

Sahara Las Vegas brings its playful yet approachable style and sophistication to the legendary site of the former Sahara Hotel & Casino. It was here legends like Frank Sinatra, Dean Martin and Sammy Davis Jr. crooned, lounged and played. Where the Fab Four stayed during the height of Beatlemania. Over 60 years later, Sahara reimagines the iconic history of this new hotel. With a spa, unmatched gaming experiences, two expansive pools, and a diverse collection of acclaimed sbe restaurants. Sahara Las Vegas is a destination that captures both the legendary heritage of Las Vegas and its contemporary cool.

While there isn’t much that you can walk to in the immediate vicinity, Sahara is close to a Las Vegas Monorail station. It’s about 100 yards away. This means you’ll have easy access to the rest of the Strip via monorail. Getting to the station is easy. Head down the Lux Tower hallway and you’ll find the doors leading to the monorail.

For some of the best people watching at the north end of the Strip, head to the beer garden at Umami Burger. This outdoor area stretches alongside Las Vegas Boulevard near Sahara Avenue. It’s especially fun to sit out here when a music festival is in full swing across the street. Save with Sahara Hotel Deals.

All guestrooms include a 55-inch HD TV, in-room safe, premium bath amenities, luxury linens, and snack boxes. Some rooms also include work desk, refrigerator, and scenic views of The Strip. Wi-Fi is available in all rooms.

Guests can take a dip in either of the hotel’s pools, or relax in a poolside cabana. Meeting facilities, business center, and convenience store are also available on-site. A complimentary local shuttle service is provided.

Guests can dine in any of the hotel’s six restaurants and two cafés. A number of bars can be found on-site. All of this plus great savings with our Sahara hotel deals.

Sorry, no records were found. Please adjust your search criteria and try again. 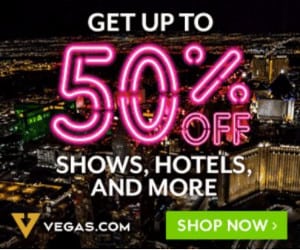 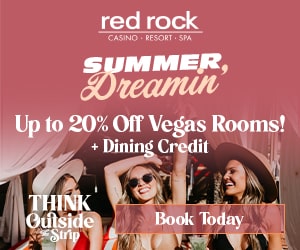